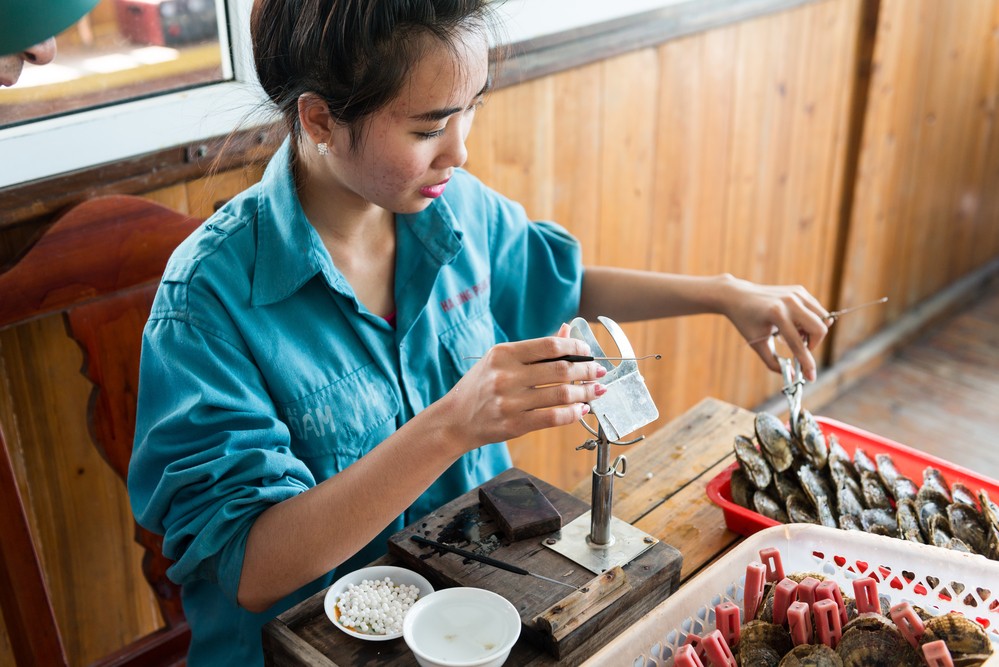 One of the most beloved gems in history, pearls have always been a symbol of wealth and luxury. They were very valuable assets, comparable to real estates as far as price goes. The reason behind that is the fact that they were extremely hard to find. Thousands upon thousands of oysters needed to be searched in order to find a single beautiful, perfect pearl and that’s because, in the olden days, they were naturally occurring stones. However, in the 20th century, the house of Mikimoto finally managed to establish the process of creating cultured pearls. And since then, the process of cultured pearl growing itself has become both a science and an art, to the world’s benefit and pleasure.

Cultured pearl growing is done in both oysters and mussels. The process is quite simple, but fragile and precious. The farmers introduce a tiny grain of sand into the chosen vehicle, either the oyster or the mussel, and simply let time and the creature do their work. The mollusk, once returned to the water, will then cover the grain of sand with layer upon layer of nacre, which, in the end, will actually turn out to be the pearl itself. The vast majority of cultured pearls are grown in Japan, in the very warm waters of the South Pacific Ocean. The large oysters are the ones that produce the so-called South Sea cultured pearls and the black Tahitian cultured pearls. China is the country that uses mussels to produce the magnificent freshwater pearls.

HALONG, VIETNAM – May 9, 2014 -Surgical implantation of an irritant in an oyster shell to produce pearls on a cultured pearl farm

As far as jewelry goes, pearls are valued by a combination of qualities, such as size, color, shape, luster, symmetry and lack of any flaws on the surface. When it comes to high quality, the usual rule that accompanies pearls is ‘the more the better’. The bigger, whiter, rounder and smoother they are, the higher their quality is and the more they cost. The sometimes exorbitant prices stem from the fact that it’s so difficult to find several pearls that are completely alike in all the factors that make up quality.

All cultured pearls come in nine basic shapes: round, semi-round, oval, drop, pearl, circled, double-circled, drop and double-bouldered. The most expensive and sought after pearls are the round or spherical ones, because of their closeness to perfection. They are usually used in the famous classical and very traditional pearl necklaces. The semi-round can be used for necklaces too, as well as for other pieces of jewelry where the maker can actually mask away the fact that the pearls are not completely round. This little trick on the eye will lower the costs of the final piece.

Button pearls are the ones that are round in shape, but have one flattened side, which is why they are normally used for single pendants or earrings, where the flat side can face the wearer and be hidden away from sight, another trick to drop the price. Drop and pear shaped pearls are also called tear drop pearls and are very much loved for their unique romantic shape. They are usually placed as the centerpiece of a pearl necklace or used as a standalone pendant. Baroque pearls are for the daring, who desire to truly have the most unique pearls out there. They are often found in bracelets or even rings.

Traditionally white and, in the past decades, black pearls are the ones that people covet most. However, cultured pearls, depending on the medium they were cultivated in and on the amount of time they spend in the water, can come in many different colors, such as: pink, green, blue, champagne, purple, chocolate browns and even in iridescent tones. The latter are called peacock pearls. However, jewelry made of cultivated colored pearls is usually extremely expensive, because it can take years to produce and collect sufficient pearls of exactly the same hue in order to make a necklace or a bracelet.

As mentioned before, with pearls, bigger really is better. The bigger and heavier a pearl is, the more valuable it’s considered to be. The official measure used by dealers and growers to measure loose pearls is called a ‘momme’. It has been used by the Japanese as a unit of measurement for centuries and, since it has been generalized for pearl trading and commerce, 1 momme is known to mean exactly 3.75 grams. The largest pearl in the world is called The Pearl of Lao Tzu or the Pearl of Allah and it weighs 14.1 lb. However, it is not considered a gem, because it comes from a giant clam and these particular pearls are not considered precious as far as cultured pearl growing goes.

When it comes to creating jewelry by combining pearls with other precious stones or metals, usually these natural gems are teamed up with gold and platinum, in order to create casings for necklaces, rings and earrings. It ups their value but they are also considered the correct companion for such valuable pieces.

Finding the perfect precious stone partner for one or more pearls traditionally depends on the type of jewelry the producer is trying to make. For example, engagement rings of the trade are usually made by placing one pearl and some small diamonds in an all yellow gold band. Necklaces and bracelets can be paired off with almost anything, but they are usually accompanied by precious stones that can match their value and price and put them in the spotlight through their beautiful colors, such as rubies, emeralds or sapphires. If planning to buy such jewelry, a good idea would be to find the ones that are on sale.

Wearing pearls is one of the most rewarding, elegant and classy stances a woman can experience. The delicate gems cast a delightful air of luxury over any wearer. In fact, pearls have always been so treasured, that they were not used solely for making jewelry, but for adorning clothes as well. Apart from that, in order to borrow some of the pearl’s beauty and perfection, our ancestors used to crush them up and add them in medicines, cosmetics and different dyes, all for the love of the pearl.