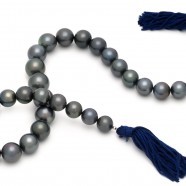 Tahitian pearls are very large, very bold and definitely very opulent. As a result, Tahitian pearls and jewelry such as a Tahitian pearl pendant, necklace or a set of earrings, have become some of the rarest and sought after jewelry items today. Their luster and color are legendary. In bygone times, European royalty sent fleets of ships half-way around the world for Tahitian pearls.

When the HMS Bounty, left Tahiti, the tribal Princess gave Fletcher Christian precious Tahitian pearls to remember her. The two had fallen in love and there would have been little chance for the HMS Bounty or her crew to ever return to island paradise. On this voyage, the Tahitian pearls sang and compelled Christian to lead the famous mutiny and return to his island love.

Tahitian pearls wear the rich tones of the ocean in silver, blue and green. These colors dance in the deep black luster of a magnificent Tahitian pearl necklace and matching Tahitian pearl earrings. As a wonderful treat, a Tahitian pearl pendant is also just a bit of paradise.